Coinworld-Wall Street Journal: Saving for Retirement? Why not consider Bitcoin!

It's a "big ambition": Investors currently have $22.5 trillion in IRAs and 401(k)s. In a recent survey of more than 500 financial advisors by the Financial Planning Association and two other organizations, 14 percent said they use or recommend cryptocurrencies, compared with less than 14 percent in 2019 and 2020. 1% of advisors said they use or recommend cryptocurrencies. This month, ForUsAll Inc., a provider of 401(k) plans focused on small companies, announced it would allow employees in its managed plans to invest 5% of their 401(k) contributions in bitcoin, ether, litecoin, and more.

One investor who has already opted for digital currencies for retirement accounts is 28-year-old Vukasin Vignjevic, a market researcher living in Maine. "I'm not against traditional assets, like stocks," he said, "but digital assets solve many of the problems facing the world today," for example, bringing financial services to people who don't have access.

Vignjevic said his IRA accounts for only a small portion of his total assets, with cryptocurrencies making up a “pretty high percentage.”

Adding digital currency to retirement accounts means a lot of risk for the average investor, including high fees and high volatility. Bitcoin has halved in price since hitting an all-time high in April as cryptocurrency regulation tightens. The U.S. Securities and Exchange Commission (SEC) has also warned investors to beware of fraudulent schemes related to IRA investments that allow alternative assets such as cryptocurrencies.

However, some industry giants aren't making it easy to make such bets with retirement accounts. Many banks and brokerages, including Charles Schwab Corp. and Fidelity Investments, primarily limit IRA investors to stocks, bonds, funds and certificates of deposit. Regular investors at Charles Schwab and Fidelity cannot buy cryptocurrencies, but they can buy shares in trust companies that invest in cryptocurrencies.

Joe Ziemer, a spokesman for a digital investment firm called Betterment, said the firm is “actively exploring” offering cryptocurrencies in IRAs and taxable accounts “in a way that enables clients to do so in a responsible, advised manner.” . Dan Egan, vice president of behavioral finance and investing at Betterment, said any portfolio above 1% is an “aggressive allocation” given that cryptocurrencies account for only 0.5% of the value of global stocks and bonds.

At the same time, many IRA providers specializing in alternative investments such as gold, real estate, and private equity are lowering the threshold for investing in crypto. IRA custodian firm Kingdom Trust offers 20 cryptocurrencies in its "Choice IRA." According to Kingdom Trust CEO Ryan Radloff, about 10 percent ($2 billion) of the $17 billion the firm holds for clients is in cryptocurrencies. That's up from 2%, or $350 million, over the past 12 months.

"Our users are trading Tesla, GameStop, bitcoin and ethereum," said Radloff, 34, "and we believe that our customers who see an opportunity to make bold use of their retirement accounts also trade, while It's not about putting money in a cookie-cutter fund like our parents did."

Customers who trade frequently often want to add cryptocurrencies to their retirement accounts because they can reinvest their profits tax-free, Radloff said. However, IRA expert Ed Slott said long-term buy-and-hold investors are better off keeping digital assets in a taxable account because they can offset their taxable income against capital losses and pay less than retirement account owners would pay when they withdraw their assets. Lower interest rates (provided they hold the investment for more than a year).

Cost is another consideration. Some IRA custodians, such as Fidelity, charge no account fees, while custodians specializing in alternative investments often charge an annual custodial or account maintenance fee plus buy and sell transaction fees.

For example, BitcoinIRA, an alternative IRA service, charges an annual account fee of $240, with an average transaction fee of 1% for sales and 5.5% for purchases, according to a spokesperson. COO Chris Kline said BitcoinIRA users can reduce or offset fees by earning up to 6% interest on cash and cryptocurrency holdings.

Regardless of where they turn, cryptocurrency investors should choose an IRA custodian regulated by federal or state banking authorities and scrutinize their investments carefully, according to digital asset startup investor Ric Edelman. Ric Edelman is the founder of consulting firm Edelman Financial Engines LLC and RIA Digital Assets Council, a financial advisor education group. Those nearing retirement should also be wary of digital currencies, as their portfolios may not have time to recover from sudden losses, said IRA expert Slott.

Yet Vignjevic, a market researcher in Maine who has been buying cryptocurrencies since 2017, doesn’t seem worried. “Digital assets are very volatile,” he said, “but in the long run, I believe I will do well.” 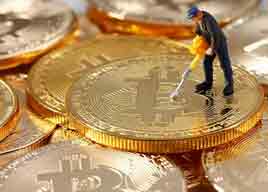